At the beginning of September 2013, top of the international agenda was to stop any further deadly chemical attacks on the people of Syria. Bringing the war criminals to justice was not far behind. A United Nations commission was already in place to investigate abuses committed by all sides and it probed 14 illegal chemical attacks including one that killed more than 1,400 men, women and children. Maher Assad, the brother of Syria’s President, Bashar al-Assad, was thought to be behind the atrocities. History is littered with brutal war crimes and the criminals behind them, and many have been brought to justice. Iraqi tyrant Saddam Hussein was hanged while Serbian Slobodan Milosevic died in his cell of a heart attack following his arrest and the charges brought against him for war crimes. Libya suffered under Colonel Gaddafi, while Bosnia saw war crimes perpetrated by Ratko Mladic, who is currently still on trial. Germany, however, has had to come to terms with some of the worst atrocities and crimes committed by humankind, and there are moves being made to see that surviving Nazis should pay for their horrific crimes before they die.

However, despite the outcry over the Holocaust and Hiroshima, war crimes continued and are still being committed into the 21st century. The previous 100 years were depressingly war-stained, but nations agreed that International courts would be established to deter and punish the worst crimes against humanity. These courts enforce new laws against violations of human rights, yet still fail to deter these atrocities from happening. Governments and victims seek justice and revenge is not uncommon. The Khmer Rouge terrorized the Cambodian people between 1975 and 1979. While under their rule, more than a million people died of starvation, disease, torture and execution. Despite the fact that the Khmer Rouge was overthrown more than 30 years ago, their legacy meant that Cambodians suffered economically, psychologically and politically for many years afterwards. In the 1990s, there was mass genocide in Rwanda while in South Africa, apartheid enforced racial segregation and economic and social control which saw millions of people being forced to relocate.

Be the first to review “War Crimes” Cancel reply 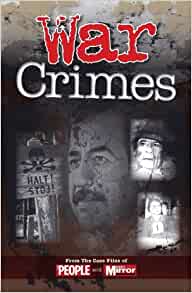 You're viewing: War Crimes £2.99
Add to basket
We use cookies on our website to give you the most relevant experience by remembering your preferences and repeat visits. By clicking “Accept All”, you consent to the use of ALL the cookies. However, you may visit "Cookie Settings" to provide a controlled consent.
Cookie SettingsAccept All
Manage consent