When Bampton’s coroner, Hubert Shillside, does not return from a trip to Oxford, Master Hugh de Singleton is called. Concerned for his old friend, Hugh takes to the road to investigate. Travel is safer than in times hence but, out of sight of prying eyes, it is still unwise to travel alone… Hugh finds a body, stabbed and left to rot, but it is not the body he was expecting to find. Indeed, reports of pillage, attacks, and chaos on the roads out of Oxford suddenly seem rampant. Hugh must ascertain whether the incidents are random, or whether something darker is afoot. The guilty cannot afford to be caught, but what lengths will they go to to cover their tracks, and will Hugh escape unscathed?

Many medieval scholars discontinued their university studies before completing their degree. Some did so because of a lack of funds, others because they were bored with a scholar’s life. Occasionally these young men formed lawless bands, robbing, and raping and creating chaos. They were called goliards. On learning that an old friend has been killed while travelling to Oxford, Hugh de Singleton, discovers the presence of a band of goliards in the area between Oxford and Bampton. Are these youths responsible? And why are they being protected by someone far above Master Hugh’s station?

Be the first to review “Deeds of Darkness” Cancel reply 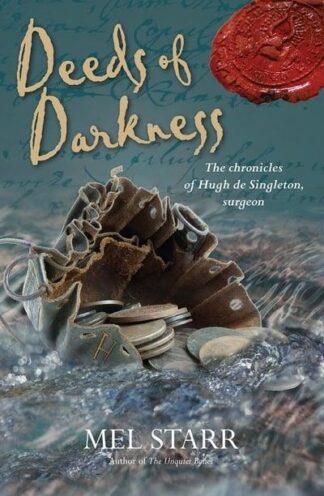