A course uncovering Advent to Epiphany

The films Calendar Girls and The Full Monty, on which this course is based, have one thing in common: nakedness. However, this is simply the trigger for the true revelations, which give these stories their heart.

Revealed is an Advent to Epiphany course in six weekly sessions. Claire Benton-Evans takes themes from the film scenes and applying them to the Bible, exploring ways in which we are revealed to ourselves and to God, and how God reveals himself to us and to the world.

Meditations precede each session in Revealed, encouraging participants to read, reflect, pray, think, question and be creative in their own time. Each of Claire Benton-Evans sessions is self-contained, meaning if a participant cannot attend one week, they will not fall behind.

Through Revealed, Claire Benton-Evans hopes God will be revealed to you.

Be the first to review “Revealed” Cancel reply 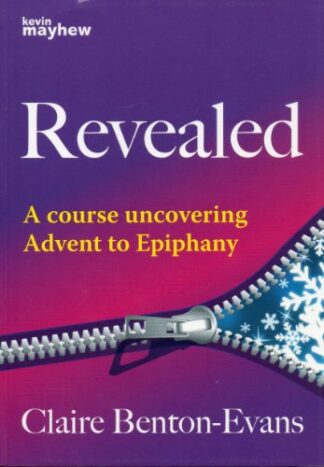 You're viewing: Revealed £7.99
Add to basket
Temporary Closure due to Relocation

Good day to you, and thank you for visiting.

BOOKS Plus has been active in Unit 6, the concourse, University hospital of Wales for 21 Years!

We’re moving to Unit 8. We will be closed for trading during this time until we reopen. Date to be confirmed soon.

We can still be contacted by email throughout the closure. Please do get in touch with any questions.

Our ability to process customer orders during this time is severely limited – due to packing up all our stock, only limited lines will be available to promptly pack up and post.

Thank you for your understanding during this transition.