A Better Ambition: Confession of a faithful liberal

By Tim Farron
Tim Farron’s account of his involvement in the turbulent politics of recent years offers a wealth of insight into life at the top of a major political party and the prospects for true liberalism in Britain today.

6 in stock (can be backordered)

From the back cover
‘I am passionate about my country and angry at the mendacity that has led to the appalling situation in which the UK and our people are heading for relative poverty and insignificance while our politics is offering bitter, unpalatable extremes. There has to be something better. In the absence of something better, we will have to build it.’ Tim Farron

Writing with warmth, humour and compelling honesty, Tim Farron charts his rise to the leadership of the Liberal Democrats – from his childhood in Preston to his central role during the Conservative-Lib Dem coalition of 2010-15. Farron speaks openly about his role as Party President and the intense experience of leading his party through the 2016 EU referendum and the snap general election of 2017. He also reflects on the scrutiny he received because of his religious beliefs.

So, having reached the top of his career, what made him voluntarily relinquish that honour? What does Tim Farron’s experience mean for those who hold to a liberal vision? Are there lessons to be learned about the role of religion in public life? And what are the prospects for true liberalism in the UK today?

Be the first to review “A Better Ambition: Confession of a faithful liberal” Cancel reply 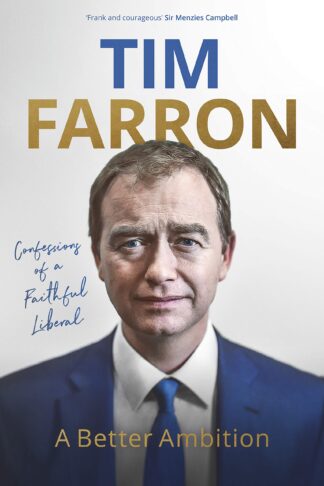 You're viewing: A Better Ambition: Confession of a faithful liberal £13.00
Add to basket