Absolutely Huge is a spoof biography of a fictional Welsh rugby player, Gethin ‘Huge’ Hughes. Mimicking the standard sports biography format, the book explores the highs and lows of his remarkable and often controversial career both on and off the pitch. An affectionate satire on Welsh rugby and the media hype that surrounds it.

This hilarious spoof biography of fictional Welsh rugby player Gethin ‘Huge’ Hughes charts the highs and lows of his remarkable and controversial career both on and off the pitch, affectionately sending up Welsh rugby culture and the media hype that surrounds it. After a stunning international debut and glory for club and country, by the age of 20 Huge is the biggest star in Welsh rugby. He’s dating the ‘nation’s sweetheart’, pop star Heledd Harte, and after one particularly heroic moment at Twickenham is voted Second Best Welshman Ever. But the good times don’t last. He inadvertently incites a pitch invasion, causes a diplomatic row on a Lions tour, gets involved with some calamitous product endorsements, suffers World Cup heartbreak and is voted the Second Worst Welshman Ever. Things don’t improve after early retirement at 23. A disastrous appearance on reality TV is followed by a brush with death on Mount Snowdon, an entanglement in a political scandal at the Welsh Assembly, a court appearance and a very public break-up with Heledd. On the eve of his playing comeback, and for the first time, the full extraordinary story of his years in the spotlight and what happened afterwards will finally be told.

Be the first to review “Absolutely Huge” Cancel reply 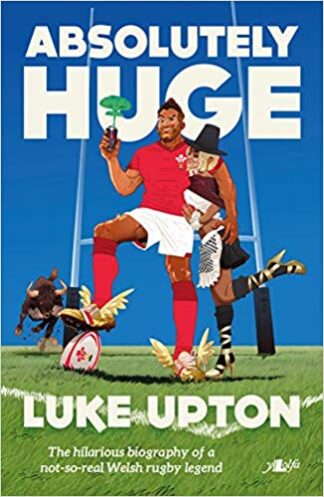