May 8, 2013: the day Manchester United fans had dreaded for nearly three decades. Sir Alex Ferguson announced he was to step down as manager of the world’s biggest football club after 27 years in charge. The Scot, affectionately known as ‘Fergie’ to United’s vast army of fans worldwide, signed off in style with an honours list that confirmed him as the most successful manager in British – and world – football. At the age of 71, he would leave United having won 38 trophies – an amazing haul that included 13 league titles, two Champions League crowns, five FA Cups and four League Cups.

Fergie would now become a director and ambassador for the club he had rebuilt from top to bottom and turned into the greatest in the world during his colourful, wonder-filled reign. That he would still be around – to offer help and advice if needed to incoming new boss David Moyes – helped slightly cushion the blow of his departure for United fans. Fergie had left Moyes a wonderful platform from which to build: a talented young squad that had just brought the club its record-breaking 20th top-flight title and a stadium and training facilities second to none.

Be the first to review “Fergie the Greatest” Cancel reply 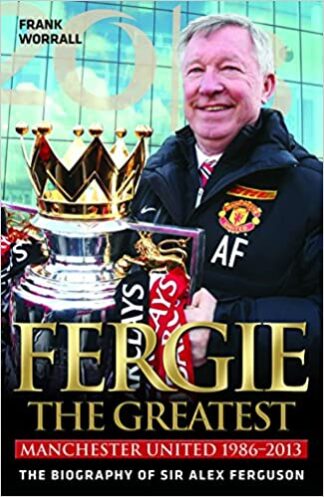