Few writers know the intricate landscape of special operations like Andy McNab. A member of the crack elite force the Special Air Service for seventeen years, McNab saw duty all over the world–and was the British Army’s most highly decorated serving soldier when he resigned in 1993.

Now, in Remote Control, his explosive fiction debut, McNab has drawn on his personal experience and unique knowledge to create a thriller of gripping authenticity, high-stakes intrigue, and unstoppable action.

After his mission is suddenly terminated in Washington, D.C., British Intelligence agent Nick Stone decides to visit an old colleague, Kev Brown. But when Stone arrives at his friend’s eerily quiet suburban home, he discovers a chilling scene of carnage. Every member of the Brown family has been brutally slaughtered except one: seven-year-old Kelly Brown. His instincts on red alert and adrenaline in overdrive, Stone grabs the girl and runs–with anonymous assassins in hot pursuit. But whom do they wish to silence: Stone, the innocent child, or both?

During a heart-pounding chase that takes the resourceful, sometimes ruthless seasoned pro and his frightened young charge from Washington to Florida, and across the Atlantic to England, Stone begins to piece together a shocking global conspiracy. Thrust into a lethal game of cat-and-mouse, Stone is certain of two things: He and Kelly are on their own. No one can be trusted. And his darkest fears about the shadowy link between politics, money, and terrorism are about to be realized.

Be the first to review “Remote Control” Cancel reply 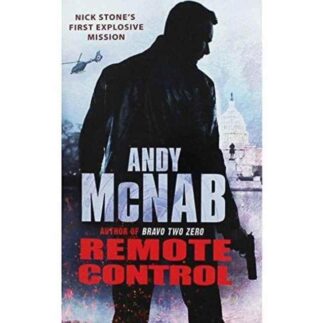