It is early 1814 and Major Richard Sharpe is still with one-eyed Capt. Frederickson and giant Sgt. Maj. Harper. Sharpe’s French nemesis Major Ducos, in the first of a series of betrayals, has stolen a fortune from Napoleon and framed Sharpe for the crime.

As fugitives from the British Army and the restored French royalist regime, Sharpe, Frederickson and Harper travel across France and into Naples to find Ducos and clear themselves. They must also deal with a loyal Bonapartist general and a rapacious Neapolitan cardinal, both of whom want the treasure. Sharpe has further problems with a fickle young wife in Regency London and an unlikely romantic attachment in Normandy.

Fast and gripping, the story is carried by Cornwell’s easy hold on vivid period detail. After an alliance of convenience with the Bonapartist general, Sharpe’s final escape is literally dazzling. Readers will relish this adventure and eagerly await Sharpe at Waterloo.

Be the first to review “Sharpe’s Revenge” Cancel reply 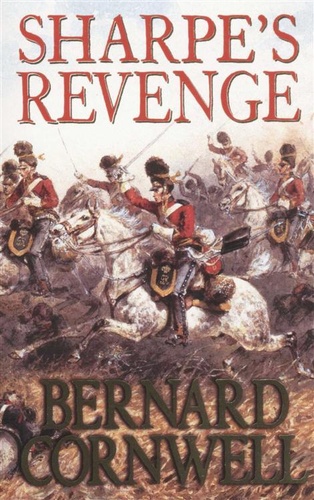