Five Men. One Robbery. A deadly game of greed, revenge and betrayal is about to begin. Fresh out of the SAS, Matt Browning is down on his luck. He owes $500,000. If he doesn’t get the money soon, he dies. From nowhere, he is offered a lifeline. A hit on al-Queda, sanctioned and helped by MI5. Matt gathers a small team of former SAS men to steal $10 million in gold and diamonds from the world’s most deadly terrorist organisation. MI5 will give them all the equipment and information they need. No charges will ever be pressed.

Matt thinks it’s the perfect crime. Safe, quick, and patriotic. But after the money is stolen, the killing starts. Someone is taking down the members of the team one by one. A silent, expert assassin is stalking the team, gruesomely murdering both them and their families. And Matt knows that he’s next. Greed is an explosive story of what happens when terrorism, money, love and jealousy combust – an explosively violent tale from the established master of the military thriller.

Be the first to review “Greed” Cancel reply 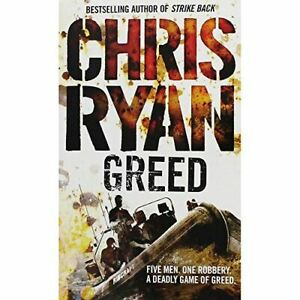