Lights out till Dawn

Before World War II has even been officially declared, ten-year-old Hazel Morgan and her eight-year-old brother Peter are evacuated, leaving London for the safety of the Sussex countryside. With her children gone and her husband John in the army, Rene Morgan misses her family terribly. When she learns that John has become a prisoner of war, she has to take on the highly dangerous job of fire watcher.

Meanwhile, Hazel and Peter are desperate to go back home. Returning to the city, they are overjoyed to be reunited with their mother and Gran. But their father is still far away and the worst of the war is yet to come. As the air raids increase, the Morgans must face the terror of the Blitz together… Another moving Cockney saga from The Sunday Times bestselling author Dee Williams, perfect for fans of Dilly Court and Katie Flynn.

Be the first to review “Lights out till Dawn” Cancel reply 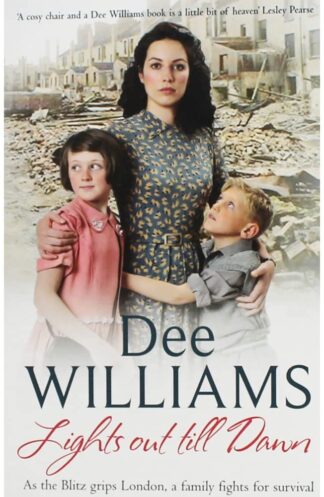