Who is Johnny Vegas?He became a household name as the unkempt, endearing sidekick of Monkey in the PG Tips adverts. But Johnny’s true genesis took place years before then…How did an innocent young lad with aspirations to priesthood – who, aged 10, joined a seminary – turn into the potty-mouthed, outrageous, addled, beloved comic that is Johnny Vegas?

Now a household name for his notoriously brazen comedy, winner of the 1997 Perrier Award in Edinburgh, host of sell-out stand-up shows and TV star of Benidorm and Ideal, Vegas has achieved everything that Michael could only hope for.Johnny fed on the applause of crowds and the laughter of friends. He would do and say the things Michael would never dream of – both onstage and off. He fed on booze and more booze, with a booze chaser. It was Johnny that dragged Michael to stardom, flipping the V to authority and snobbery along the way.This is the story of how it happened; of a young Michael growing up in St Helens, and how the events of those tender years gave birth – much later – to a lovable monster. The rest – the heady mix of over-indulgence, alcohol, gluttony and comedy; the years spent as a 50/50 mix of blood and booze; the nationwide acclaim and millions of fans – is history.This is an extraordinary, revelatory tale from one of the nation’s most fascinating, most relatable and most lovable comedians.

Be the first to review “Becoming Johnny Vegas” Cancel reply 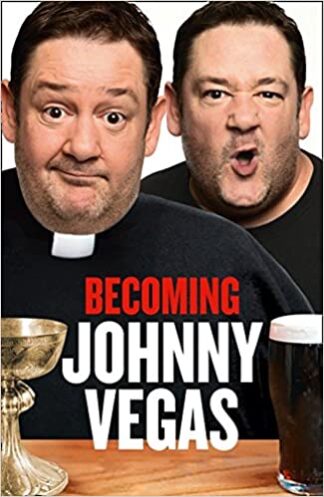 You're viewing: Becoming Johnny Vegas £3.99
Add to basket
We use cookies on our website to give you the most relevant experience by remembering your preferences and repeat visits. By clicking “Accept All”, you consent to the use of ALL the cookies. However, you may visit "Cookie Settings" to provide a controlled consent.
Cookie SettingsAccept All
Manage consent