This is an illustrated guide shown in over 75 images. It is a fascinating history of the Messerschmitt 109, from its maiden flight in 1935 through to the redesigned versions that flew during the final months of World War II. It includes complete technical specifications detailing the Messerschmitt 109’s armament, power plant, dimensions, weight and performance. It features over 75 photographs of the Messerschmitt 109 in action, as well as a cutaway diagram showing the interior construction of this classic fighter aircraft.

The story of the Messerschmitt began in 1934, although chief designer Willi Messerschmitt had no previous experience of designing fighter aircraft. This book will lead you through the chronological history of this classic aircraft and its involvement in World War II, including details of how the Messerschmitt 109 delivered a series of high-speed diving attacks to break up the enemy during World War II. It describes the Messerschmitt’s design and development, and includes eyewitness accounts from pilots who flew it in action. With over 75 historical photographs, this volume is an essential companion for every military aircraft enthusiast.

Be the first to review “Messerschmitt 109” Cancel reply 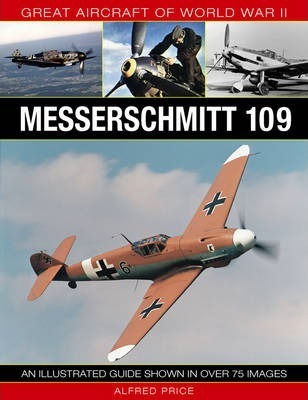 You're viewing: Messerschmitt 109 £2.99
Add to basket
We use cookies on our website to give you the most relevant experience by remembering your preferences and repeat visits. By clicking “Accept All”, you consent to the use of ALL the cookies. However, you may visit "Cookie Settings" to provide a controlled consent.
Cookie SettingsAccept All
Manage consent