The World of Karl Pilkington

Karl Pilkington, the Confucian-like savant of the ‘Ricky Gervais Show’, has led an extraordinary and curiously individual life. As a kid growing up in Manchester he regularly missed school to accompany his parents on caravanning holidays and left without collecting his exam results: his family weaned him well.

Pilkington’s is a brilliant mind, locked inside a perfectly round head, and uncluttered by the unhelpful constraints of logic or common sense; factors that have led him to such dazzling insights as ‘you never see old men eating Twix bars’ or that the ‘Diary of Anne Frank’ was ‘an Adrian Mole sort of thing’.

In this pithy and hilarious book, Karl is in conversation with (the often bewildered) Ricky Gervais and Stephen Merchant, the writers and stars of ‘The Office’ and ‘Extras’, outwitting even these comedy Goliaths with his take on such contentious issues as charity, the lack of Chinese homeless people, reincarnation, the rights of monkeys and favourite superpowers.

Featuring Karl’s original illustrations, imaginative scribblings, full-colour pictures sent in by fans, and the best conversations of the first twelve podcasts, this is a unique trip into the world of one of our most innovative thinkers, visionaries and prophets, or as Gervais and Merchant know him, ‘the funniest man alive in Britain today’. 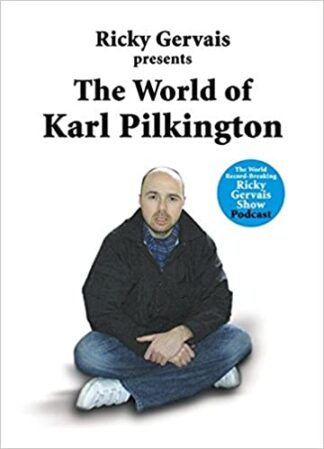 You're viewing: The World of Karl Pilkington £3.99
Add to basket
We use cookies on our website to give you the most relevant experience by remembering your preferences and repeat visits. By clicking “Accept All”, you consent to the use of ALL the cookies. However, you may visit "Cookie Settings" to provide a controlled consent.
Cookie SettingsAccept All
Manage consent