With a Light Touch – Written By Dr Ian Donald

We live in an ageing society, and for most of us our final years of life will be spent with a degree of frailty. This book provides a practical guide and a Christian perspective on wise use of healthcare for those living with frailty. It is helpful both to those who are already experiencing how age limits their abilities, and also to those who are becoming involved in healthcare decisions for parents or older relatives.

Dr Ian Donald has been a specialist in the care of older people for over 30 years, and a pioneer for care in the community. He discusses openly the limitations of healthcare, the risks of too many pills and the dangers of a long spell in hospital. He argues that a unique style of healthcare is now emerging, preferable to many, which lies somewhere between hi-tech and comfort-only care.

Dr Ian Donald trained at Cambridge and Edinburgh Universities, and became a consultant in Geriatric Medicine in Gloucester in 1988. He led the department for 15 years and undertook research into the epidemiology of ageing within the county, which led to over 20 publications and his MD at Cambridge University. Throughout his career he was a pioneer for Hospital-at-home services and liaison healthcare with care homes and community teams, and in the last 10 years he developed a specialist frailty team working in the Emergency Department of the hospital.

He became concerned that many older people were taking too many medications potentially causing more harm than good, and this led to the development of his own prescribing guidelines for those living with frailty. These were widely adopted across the county and led to marked improvements in appropriate prescribing. In 2018 the Gloucestershire Hospitals Trust chose him for the Lifetime Achievement Award. He has been a member of the Christian Medical Fellowship throughout his working career, and was invited to speak at the New Wine conferences in 2009 and 2010 on some of the topics raised in his book, With a Light Touch.

His wife of 40 years, Philippa, was ordained in the Church of England in 2011. They have three sons and two grand-daughters. 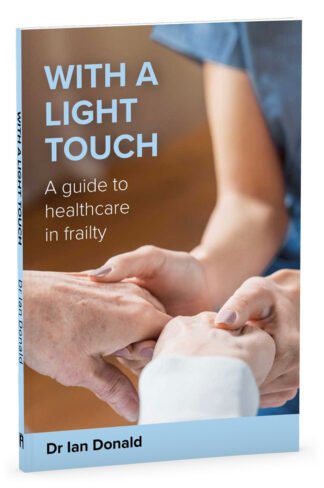 You're viewing: With a Light Touch – Written By Dr Ian Donald £9.99
Add to basket
We use cookies on our website to give you the most relevant experience by remembering your preferences and repeat visits. By clicking “Accept All”, you consent to the use of ALL the cookies. However, you may visit "Cookie Settings" to provide a controlled consent.
Cookie SettingsAccept All
Manage consent