Exploring British history from Stonehenge to the War on Terror and the most influential moments in between. The Roman invasion of Britain, influential rulers like Alfred the Great, the Norman Conquest and perhaps the most defining moment in the last thousand years: Magna Carta. It also looks at famous battles between the home unions, such as Bannockburn in 1314, and assesses the impact of the Black Death.

The Battle of Agincourt, the Spanish Armada, the devastating civil war in the 17th century, the Battle of Trafalgar, the Battle of Waterloo and the two World Wars represent British military history. The book discusses the contributions made to society by Captain James Cook, Isaac Newton, Horatio Nelson, Charles Darwin, the Beatles, Margaret Thatcher and Princess Diana, plus it looks at our greatest sporting triumph: winning the football World Cup half a century ago. 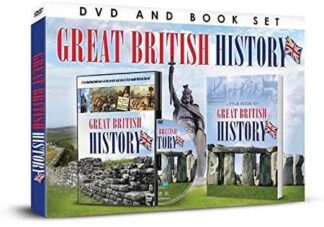 You're viewing: Great British History DVD/Book Set £4.99
Add to basket
We use cookies on our website to give you the most relevant experience by remembering your preferences and repeat visits. By clicking “Accept All”, you consent to the use of ALL the cookies. However, you may visit "Cookie Settings" to provide a controlled consent.
Cookie SettingsAccept All
Manage consent